Thanks to the mighty Marcellus shale play, Pennsylvania’s natural gas production has boomed nearly 30-fold since 2005. At over 16 billion cubic feet per day (Bcf/day), the Marcellus, also being developed in West Virginia, now produces more gas than all of Canada. Our shale revolution is even more remarkable because it has generally come in spite of lower prices, a problem that obviously makes producing energy more difficult.

Rising shale has also led to a natural gas power generation revolution in once coal-dominant Pennsylvania. Electricity is a baseload demand market that usually comprises 40-45% of a state’s energy usage. The Keystone State has extended its gas capacity to about 12,200 megawatts (MW), up from 9,400 MW in 2010.

Unfortunately, with many coal plants coming offline, Pennsylvania’s overall power capacity has actually fallen from about 46,000 MW back in 2009 to 42,000 MW today. Thus, as a growing economy and population where power shortages mean more blackouts, the nearly $15 billion now being invested in new gas plants in Pennsylvania is crucial. Pennsylvania will see most of the 10,000 MW of coal capacity retired nationally 2016-2017 (here). 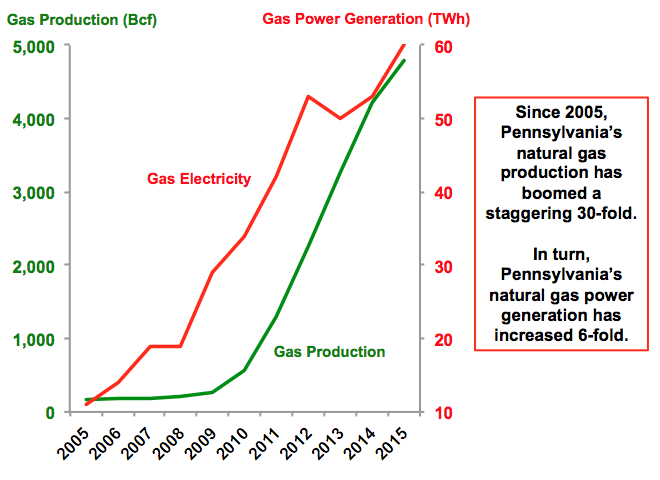 Pennsylvania’s natural gas boom has had the measurable benefit of lowering total CO2 emissions in the state’s power sector by about 30%, a very important development because it’s absolute emissions that are required to tackle Climate Change. As for unit of electricity produced, Pennsylvania has evolved from emitting about 1,300 pounds of CO2 per MWh in 2005 to just 910 pounds today, another example of why anti-fracking positions make little environmental sense.

This 30% reduction in CO2 emissions per MWh over 10 years is actually better progress than what has been experienced in California’s power market, continually cited as EPA’s exemplar for other states to follow (here). Since California first installed its Renewable Portfolio Standard in 2003, the state’s CO2 per MWh has surprisingly stayed at around 630 pounds, even increasing in some years (see EIA data, here). And Pennsylvania has tremendous room for natural gas growth: gas is only about 30% of Pennsylvania’s power generation, compared to over 60% in California.

So, despite not being blessed with the great sunshine and wind areas that California has, Pennsylvania has been lowering its CO2 emissions rate faster with shale gas. And California: has power rates that are about 40% higher, has a very expensive regulation of 50% RPS by 2030, and is forced to import 33% of its power. And also in stark contrast: California imports over 90% of its natural gas, while Pennsylvania supplies the clean energy source to surrounding states, like New York (here).