If you were driving during the 1970s, do you remember waiting in line for an hour or more just to put gas in the ol’ car? Thanks to the OPEC oil embargo, petroleum was in short supply. At that time, America’s need for crude oil was soaring while U.S. production was falling. As a result, the U.S. was becoming increasingly dependent on foreign suppliers. Things have changed quite a lot since then. Beginning in the mid-2000s, America’s dependence on foreign oil began to decline. In this article, we will discuss how America’s production, consumption, and dependence on foreign supply have changed since 1949.

Without petroleum, societal comforts would regress over 100 years. Whether you are a fan or foe, petroleum is a relatively inexpensive source of energy and widely used. In 2014, Americans consumed about 375 million gallons of gasoline per day. This represented approximately 47% of total domestic petroleum consumption. Which states used the most gasoline? California topped the list, consuming over 37 million gallons per day or 11% of total U.S. consumption. Texas was a close second, using more than 36 million gallons per day or 10% of the total; followed by Florida (6%); New York (4%); and finally, Ohio (4%).

Worldwide consumption of petroleum liquids in 2013 was 91.2 million barrels per day with the U.S. consuming the most (21% of the total). The most populous nation on Earth, China, consumed 11% and the tiny island of Japan used 5%. Conversely, the top three oil-producing countries from 1995 through 2014 were the same. They simply traded places. They were the U.S. Russia, and Saudi Arabia.

Currently, the U.S. is much less dependent on foreign supply than it was a decade ago. The following chart shows how U.S. production, consumption, and net petroleum imports have changed since 1949. Notice how net imports began to fall in the mid-2000s (green line), while consumption was flat (blue line). Around 2009, U.S. petroleum production began to rise as new technology provided innovative extraction methods. In short, the U.S. shale oil boom was a major force. However, collapsing prices led to numerous bankruptcies and fewer drillers. It’s noteworthy that the period covered in the chart includes the peak in oil prices, which occurred in June 2014, and its subsequent decline. From its peak in June to the end of the year, the price of crude fell 50%. For the entire year, oil prices declined 45.6%. The following year (2015), prices decreased over 30%. 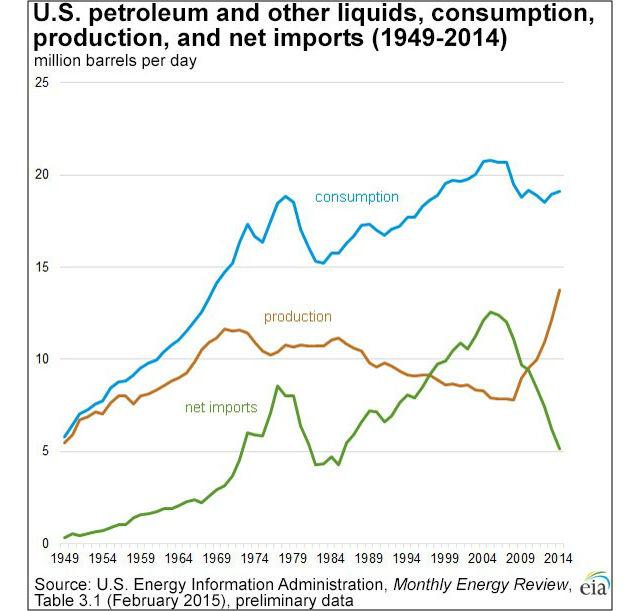